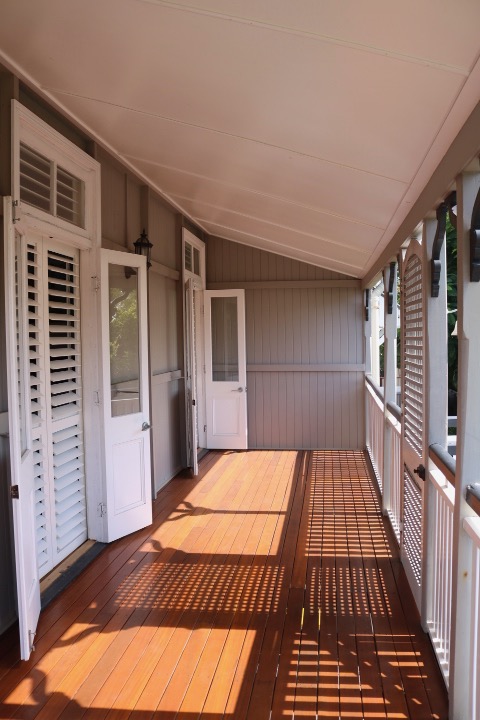 Bermuda Shutters are a must-have if you love the Hamptons interior style. They’re a bestseller for good reason, as the shutters instantly update a room and offer superior quality for a plantation shutter.

If you’re after shutters which transport a room in your home to the Bahamas, you will get this effect by installing Bermuda Shutters.

With overseas travel not an option in the immediate future, why not bring the holiday feels to your home with a plantation interior? You’ll create a home you won’t want to escape from!

If you’re not convinced, here are some reasons why Bermuda Shutters are the window furnishing of choice for your Brisbane home.

More often than not, plantation-style shutters are chosen for a Hamptons interior. However, Bermuda Shutters can work with most interior styles.

No matter your house style, Bermuda Shutters will complement and uplift the existing interior or exterior of your home.

The shutters come in standard stock colours and a custom colour range. White is the most popular colour choice and provides a refreshing update to the windows of your home.

White will always instantly revive a tired interior. It can work with the brightest of colour schemes or blend in with a neutral interior.

Bermuda shutters are also known as plantation shutters. They can be ordered in 3 main materials: wood, PVC or aluminium.

The Bermuda Shutters by Blinds Plus Awnings are aluminium. They are a quality shutter and can be installed both internally and externally.

They won’t fade or warp due to the weather and they are a sturdy installation. Wet weather won’t cause the shutters to buckle or deteriorate.

It’s important to use a quality shutter when installing them outside as the elements can cause the shutters to deteriorate quickly.

If you’re after outdoor plantation shutters which won’t buckle when exposed to weather, Bermuda Shutters are the best choice.

Bermuda Shutters are Versatile and Easy to Maintain

If you’re after shutters which can be used both internally and externally to keep a cohesive look, choose Bermuda Shutters.

They’re functional and easy to maintain and the blades can be opened or closed to suit your personal preference. Functionality and ease of maintenance are what makes Bermuda Shutters so appealing.

They make a feature to each of your windows and outdoor areas. You’ll spend more time staring at the shutters than the view outside the window because of their immaculate look.

A shutter that lasts in Brisbane’s harsh environment should be an important factor when choosing shutters for your home.

I have had the privilege of working with both Jo and Roger for over a decade now and in that time I have built three homes all of which Blinds Plus Awnings have provided my dual block-out internal blinds.
Jo is always been so professional, reliable, honest, friendly and her experience and knowledge is the ‘best’ in the business which has resulted in all my homes looking amazing as the quality of there products and competitive price does not even compare to their market competitors! They are always flexible with installation times and a change of plans is never a problem. Rodger and his team always work efficiently and are both honest and completely trustworthy.

Having dealt with Blinds Plus Awnings & Shutters since 2008 we have had excellent service from their courteous staff over the phone and with our installations. We have had reason to again call upon them in recent times due to storm damage to some of our awnings and again we have nothing but praise for Jo and Roger and their staff.
We would never hesitate to refer them to our family, friends and neighbours.

A number of years ago we were fortunate enough to be recommended to Blinds plus Awnings. We first used their services in a commercial property and found them to be exceptionally easy to deal with. Their prices were far better than all of their competitors. We have since used them many times for every shutter, blind or awning that we have needed whether commercial or domestic.
Both Jo & Roger have great product knowledge & are very helpful in advising
on both style & installation
Jobs have always been finished on time. & on the rare occasion of the need for follow up, it has been dealt with in a pleasant & timely manner.
We have no hesitation in recommending them.

If you are looking for the best blinds, awnings and shutters in Brisbane, Ipswich or the Gold Coast. Then we have the solution. Great products, quality workmanship, licensed and insured. What more could you want? Call us today on 07 3287 9181.